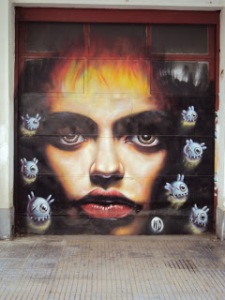 “Psirri, psirri, psirri, psirri”, repeat the name fast enough and you conjure up images of busy people passing on a succulent secret in whispers. In some ways, Psirri is a tasty secret, its often dark side streets hidden to many tourists who prefer to stick to the better-known, brighter alleys of neighbouring Plaka.

But that’s a real shame, as this is one of the most interesting areas, both historically and culturally, in the whole city.

Psirri has known many incarnations throughout its long history. Even the origin of its name is lost in the jumble of time, some saying it comes from early settlers who came from the island of Psara, and others claiming that it arises from the wealthy Pseirros family who once owned much of the land in the area.

Understanding this part of Athens requires a little knowledge of modern Greek history; although inhabited in both antiquity and Ottoman times, Psirri rose to prominence during the Greek War of Independence because many of the heroes of the revolution built homes here. Their names are still commemorated today in the streets surrounding the main square, known as “Hero’s Square”.

The spirit of this fascinating neighbourhood carries on throughout the centuries. History and the present merge on Pittaki street, named after a nineteenth century revolutionary, Kyriakos Pittakis, and now adorned with a twenty first century imaginative display of street lights produced by a local arts collective. All praise to the residents of Psirri for maintaining these lights, which remain shining nightly two years after installation- unusual in a city that often takes no care protecting new installations and initiatives.

Romantics might like to take a stroll down Thekla Street, where Lord Byron first spotted the Greek beauty immortalised in his poem as the “Maid of Athens”…and even if your soul doesn’t feel the pull of a poem penned in 1810,  it can surely appreciate the fine leather soles made by the famous poet sandal maker whose shop is also on Thekla Street.

The neighbourhood hasn’t always had a bright past, however. It gained notoriety following the war of Independence when many of its residents became more  armed and dangerous thugs than heroes of the revolution. One group of criminals known as the Koutsakavides were so powerful in the area they became a law unto themselves. The Koutsavakides had a fashion sense of their own, too, sporting long moustaches, high-heeled pointy toed boots (the precursor to the winkle-pickers, perhaps?) and tight trousers. They got their name from their odd gait (‘koutsos’ or lame) and were eventually suppressed at the turn of the nineteenth century by newly determined authorities who clipped the fifty year stranglehold the Koutsavakides had held over Psirri through humiliation tactics, cutting off the pointy toes of their shoes, shaving their moustaches and confiscating their weapons.

So it was that by the beginning of the twentieth century Psirri had gained a reputation for harbouring the underworld. it was here that Rembetika, the urban Greek folk music that sings of hash, heroin and poverty grew to prominence. But it also was home to skilled craftsmen who lived productive, law-abiding lives working predominantly in the leather and soap making businesses. Many of these families came from Naxos, and even today, if you visit the main square in Easter week you will be overwhelmed by dozens of Naxiots selling lamb and delicious Naxos cheeses.

Architecturally, Psirri is an intricate mish-mash of its past. Its industrial history is morphing into new guises as many of the old factory and workshop buildings throughout the area have been re developed and sold as loft or gallery space.

Many of the mansions built after the war of Independence now house museums and cultural centres.

And keep your eyes peeled for some beautiful iron worked doors and quite a few twentieth century Art Deco and Bauhaus apartment buildings.

There are dark alleys and boarded up, decaying buildings that shadow Psirri’s murky past and show its darker face. Turn the wrong corner and you might see evidence of drug use, homelessness and civil discontent.

But that’s not a reason to dismiss this wonderful quarter. There is also a myriad of lively bars, intriguing shops, restaurants and homes that have been lovingly restored. This is not a cold, uncaring part of town. Here, residents know each other and greet each other daily.

What makes Psirri so endlessly fascinating is that it is a kind of microcosm of modern Greek history and it is as vibrant, individualistic, engrossing, creative and engaging as the country itself.